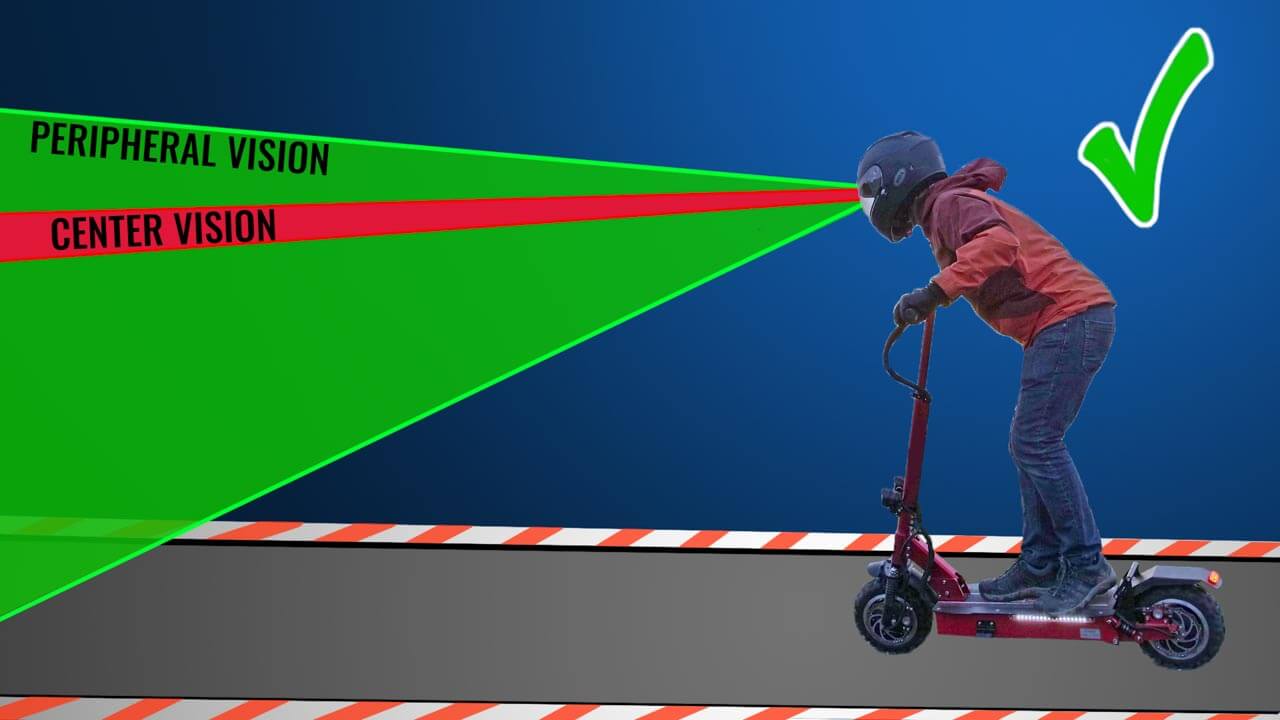 In this article we’ll cover the four most important elements of riding fast on electric scooters: how to control your vision, hit your apexes, use brake markers, and ride smoothly

Anything worth doing, is worth doing well, especially if it’s an activity that can kill you.

Riding as fast as you can on a race track is dangerous, but it’s also exhilarating, in a life-altering perspective-changing way. There are few activities in life which can make you feel as intensely alive as racing does.

Track riding technique is a big subject. There are volumes on the subject of motorcycle racing (the closest analog to electric scooter racing).

This article isn’t meant to be a comprehensive guide, but a primer on the four most important elements of racing technique, distilled from 5.5 seasons racing a very small motorcycle (about twice the weight of a Dualtron X2).

There is nothing more important (or more difficult) when racing than controlling where your eyes are focused. It sounds so simple, but it’s incredibly hard to get right, and you will never be fast unless you can master this.

The main thing is to always look far ahead. Further than that. Nope, still not far enough.

The truth is, it’s almost impossible to look too far ahead, as long as the track remains somewhere within your field of view.

Why You Need to Look Far, Far Away

What’s wrong with looking right in front of you? Two things.

First, It’s pointless and frustrating to look at the pavement 3 m in front of you, because it’s too late to do anything about it. If you’re heading toward a pothole at full speed and it’s 3 m away, you’re definitely going to hit it one-tenth of a second from now.

If the apex of your corner is 6 m away and it looks like you’re going to miss it, don’t fight it now. That decision was made 2 seconds ago. Get it right on the next lap.

Second, everything is going to come at you too fast if you’re looking too close and you’re going to feel overwhelmed, as if all of your reactions are arriving too late. Push your vision out, far away from you.

Make a game of not using your central vision. Focus as far out as the horizon at times, and still use your peripheral vision to see exactly where you’re going. It’s scary at first, but it works.

When you do this, your whole world slows down. You’ll have time to breathe, and time find a rhythm to each lap. You’ll suddenly have enough time to pick your end-of braking marker, your turn in point, your apex and your reference point to get back on the throttle (we’ll cover these in-depth later).

Okay, this all sounds pretty easy. What’s so hard about it?

Target fixation, which is what happens when your eyes latch on to something and won’t move on smoothly to the next marker. It’s especially bad if the thing you’re looking at is somewhere you don’t want to go, like the outside edge of the track, or another rider.

Now pick a spot in the center of the room and keep your eyes there. Move your attention smoothly across the room using your peripheral vision. It feels weird, but you can do it.

Well, seven million years of evolution has taught our brains that danger comes from things that are close to us. So, when your adrenaline starts pumping, your brain compels you to use your central vision and pull your view in close. On the race track this causes target fixation. Avoiding it is a never ending struggle.

So keep your eyes up and avoid latching onto landmarks. Use your peripheral vision and “keep it fluid”.

You’ll be navigating the racetrack using markers: asphalt patches, skidmarks, small holes in the pavement and so on in order to make small changes in your racing line from lap to lap and see what works better.

So you’re going to have to start picking out markers! The easiest marker to start with is your apex. In almost every corner, you are going to want your path to go from the outside edge of the track to the inside edge and back to the outside, following the straightest path possible.

This means your tires should come right up against the inside edge of the track at some point. If you find yourself running wide at the exit of the corner, you can get some of that space back on the next lap by apexing tighter (closer to the inside edge).

The most likely cause of running wide at the exit, however is that you are looking at the dirt outside of the turn (where you don’t want to go) rather than looking down the inside of the curve to the straightaway (where you do want to go).

If you correct your vision here and change nothing else, you’ll find yourself with gobs of extra room at the exit… which means you can go even faster next time through.

Another thing that can make you run wide at the exit is hitting your apex too early. You’re going to feel anxious as the corner rushes toward you, and sometimes it’s going to make you start turning too soon, causing you to apex way too early. It’s easy to see where that can lead to trouble, looking at this diagram.

Most riders find that apexing half way through the turn or slightly later gives them the most options for braking, passing, getting back on the throttle and also lets you see further around the corner earlier. So pick an apex point and try to hit it consistently every lap.

If it’s not working, push your marker back or pull it forward a little.

Consistency is key, though. If you can’t hit your markers every single lap, then it’s going to be tough to know if the little changes you made on purpose helped you go faster or some other random thing you did, which you won’t be able to repeat.

Pro Tip: Don’t use outhouses next to the track as braking markers, as they move from weekend to weekend. Tracks will often have small plastic countdown marker flags mounted at the edge of the track (3, 2, 1). If these aren’t in the right place for you, pick a skidmark or other feature on the track to use as a reference point.

Riding a smooth predictable line is important, not just because it yields better lap times, but because it’s the #1 thing you can do to stay safe when riding with others.

Stay on the racing line, and make only small corrections if you discover you have picked the wrong line. Don’t brake unusually early or hard if you’ve just passed someone and have pulled directly in front of them.

They might not have the braking skills that you do. If you’re going to out-brake someone in order to pass them at the entrance to a corner, pass them on the inside, so you can take the line. Make sure you can get a full scooter-length past them before the turn-in point.

Also be sure you can finish what you started. If you run up the inside of someone at the entrance of a corner with the intention of passing them on the brakes, it’s extremely bad form to blow it and skid in a straight line right through their path and off the edge of the track (it happens).

Riding predictably will help others safely share the track with you, sometimes very closely, without colliding with you. Once you’ve been racing with the same people long enough, you get to know their riding styles.

Racers who know each other well can ride so close that they occasionally rub elbows together at speed without causing problems.

Some of the best moments on the racetrack and the best after-race storytelling comes from very close racing. It’s something to aspire to, but not until you know each other (at least on-track) very well.

The techniques above are the simplest yet most difficult components of going fast. Solidifying these fundamentals into your practice routine will keep you fully occupied for several race weekends. Perfecting them can take a lifetime.

In the next installment, we’ll get into some easier subjects which are really fun: Braking at the limit, passing people who are riding faster scooters than you are and carrying massive corner speed.