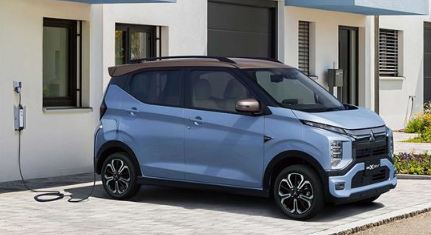 Mitsubishi has now released the official image of a pure electric K-Car model called “Ek X EV”, which will be launched this summer.

The new car will be launched in the Japanese market as a sister car to the Nissan Sakura. IT House learned that the “X” in the new car’s name is “cross”.

The new car will be equipped with an electric motor with a maximum power of 47 kilowatts (63 horsepower), a maximum torque of 195 Nm, and a 20kWh battery pack. The full cruising range when fully charged is 180 kilometers. Eight hours, fast charge to 80% in just 40 minutes.

In the interior, the UK X is equipped with a small-sized full LCD screen, a three-spoke multi-function steering wheel, a central control multimedia display with a floating design, and the function buttons in the main control panel area are also partially Touch design.

The following are real photos brought by gqjapan Yasui Hiromitsu: