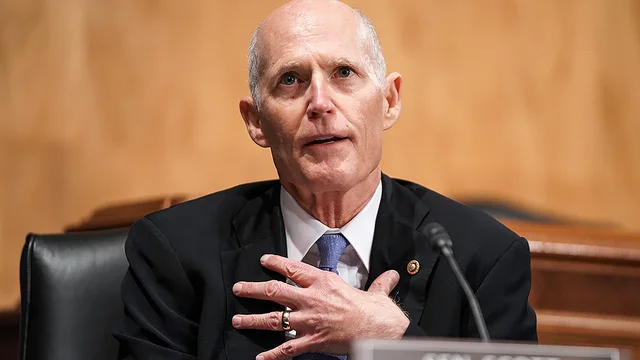 In comments Sunday, the Republican Senator from Florida warned against the military (and presumably everyone else) relying on EVs, suggesting the power grid would be ill-equipped to handle them, especially during tropical storm season.

WABC radio host John Catsimatidis asked Scott about how EVs would be charged after a hurricane when the power was out, leading Scott to free associate.

“You can’t,” Scott said, before pivoting to the Democrats and legislation under consideration in the Senate Armed Services Committee, to which he belongs.

“They’re trying to make all of our non-combatant vehicles electric on our bases. Well, what happens when the electricity goes out?”

“And by the way, what’s the electricity created by? A lot of it by natural gas. Most of Florida homes are powered by natural gas. When we have a hurricane, you might be out of power for a week! So your car’s not going to work.”

During storm recovery, essential facilities are routinely first priority for power recovery, and one would suspect military bases have recourse to power generation off the grid. But Scott is correct in that Floridians have had to wait a week or more for power restoration after hurricanes on numerous occasions.

The legislation requires at least 75% of “non-tactical vehicles purchased or leased by or for the use of the Department of Defense shall be electric or zero emission vehicles; and use a charging connector type (or other means to transmit electricity to the vehicle) that meets applicable industry accepted standards for interoperability and safety.”

Scott mistakenly said that 100% was the threshold sought by the legislation.

“Transitioning the military’s non-tactical fleet of vehicles to electric or other zero-emission vehicles would have a significant impact on the U.S. government’s greenhouse gas emissions,” Warren told Breaking Defense upon introducing the Senate version of the bill. “This is an effective solution that helps us tackle the climate crisis and keeps the military ready for the future.”

The legislation appears to be stalled out in both the House and the Senate, rendering the concern largely virtual.

Scott also blasted California’s new goal to end the sale of gas powered vehicles in California by 2035 as a reason that “people with sense are leaving that state.”