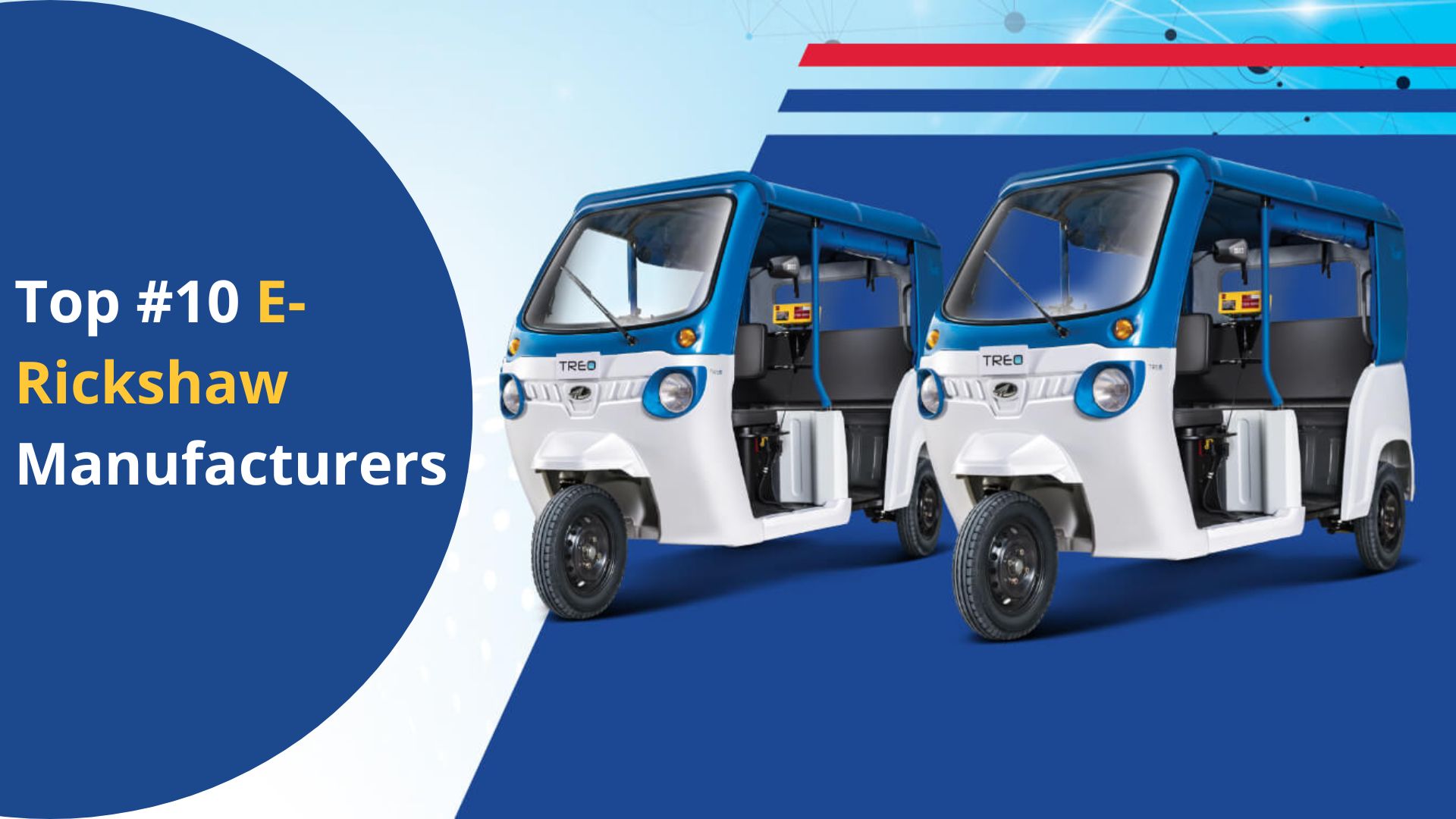 With India widening the scope of E-vehicle acceptance, the companies involved in manufacturing the E-vehicles are making the products highly reasonable and easy to commute. Indian passengers are finding it easy to use E-rickshaws to travel from one place to another which has directly increased the demand for E-Rickshaws.

Additionally, the higher demand has been brought to the notice of potential entrepreneurs who were looking for an opportunity to meet these high demands and have stepped down in the market.

The OEMs in the market who are the key observant of the supply and demand, are going to provide the available mobility solutions and help in empowering the segment to carry out the operations in the different cities across the country.

Following is the list of the top 10 prominent E-rickshaw manufacturers in India:

However, the company was later changed to Mahindra Electric Mobility. In addition to the wide variety of technology, the company has experience in producing EVs with drive train technology which gives mobility solutions.

The company which comes across as the fastest growing and one of the youngest E-rickshaw manufacturers is Atul Auto. They entered the market of e-vehicles in the year 1986. Atul Auto has made its name among the World’s top 3-wheeler companies.

The company has a range of vehicles like auto-rickshaws, cargo three-wheelers, etc. One can witness the growth of the company through the lakhs of vehicles over the streets of India. Atul Auto maintains an extensive and promising portfolio of E-vehicles which including rickshaws that are operated on batteries. For example, Atul Elite Plus, Atul Shakti Cargo, Atul Elite Cargo, Atul GEM Cargo, etc.

Jezza Motors are an established and credible supplier, manufacturer, and exporter of electric rickshaws. Jezza motors have been making a significant change in the market for E-vehicles. More importantly, the company is making significant advancements in the field of passenger E-rickshaws.

The passenger rickshaws are particularly designed keeping in mind the high technology and high-grade components to maintain the higher standards.

Piaggio Vehicles Pvt. Ltd can be referred to as an E-rickshaw company that is known for providing one of the best electric solutions in India. Mr. Rinaldo Piaggio found the company in 1884 to start the journey in the field of electric vehicles by launching Ape in the year 1999.

In addition, Piaggio has been leading the intra-city transportation league happening in India. Later in the years, Piaggio vehicles continued to make rickshaws and three-wheelers to make a strong impression in the EV market.

Kinetic Green comes across as one of the leading companies in the field of electric vehicles. With the vision to change the Indian auto sector. Kinetic Green is becoming one of the most popular auto brands which is changing the concept of the Indian EV sector.

H.K. Firodia found the company to make it one of the most popular companies in the industry with a strong foundation and fundamentals. Kinetic energy poses one brand which offers trust and reliability to over 70 lakh vehicles that the company has sold over the years.

City Life, the E-rickshaw company is a branch of Dilli Electric Auto Pvt. Ltd was established in the year 2015 which supplies battery-operated loaders, E-rickshaws, etc.

The company has, over time, got a good reach in the market of electric vehicles because of its top-notch quality electric rickshaws. The professionals and experts at the company design these vehicles to maintain the qualitative aspect of the vehicles. Some of them are City Life Butterfly, Delux XV850, City Life School Type XV850, etc.

Udaan was established as a firm (branch of Energy electric Vehicles) in the year 2015. The company is a manufacturer of a very wide range of electric vehicles which includes E-rickshaws and three-wheelers too.

Mini Metro EV is one prominent E-rickshaw manufacturer which was established in the year 2014 to manufacture and provide services in the field of electric vehicles. The broad range of products allows the company to capture a larger share of the market. The company is based in Uttar Pradesh where they have the largest manufacturing plant set up in Meerut. Some models which have the quality of international standards are Mini Metro M1 MS Battery, Mini Metro Gold Rickshaw, etc.

The largest E-rickshaw manufacturer under the umbrella of Saera Electric Auto has a legacy of 40 years in the field of the EV industry. Mayuri’s first